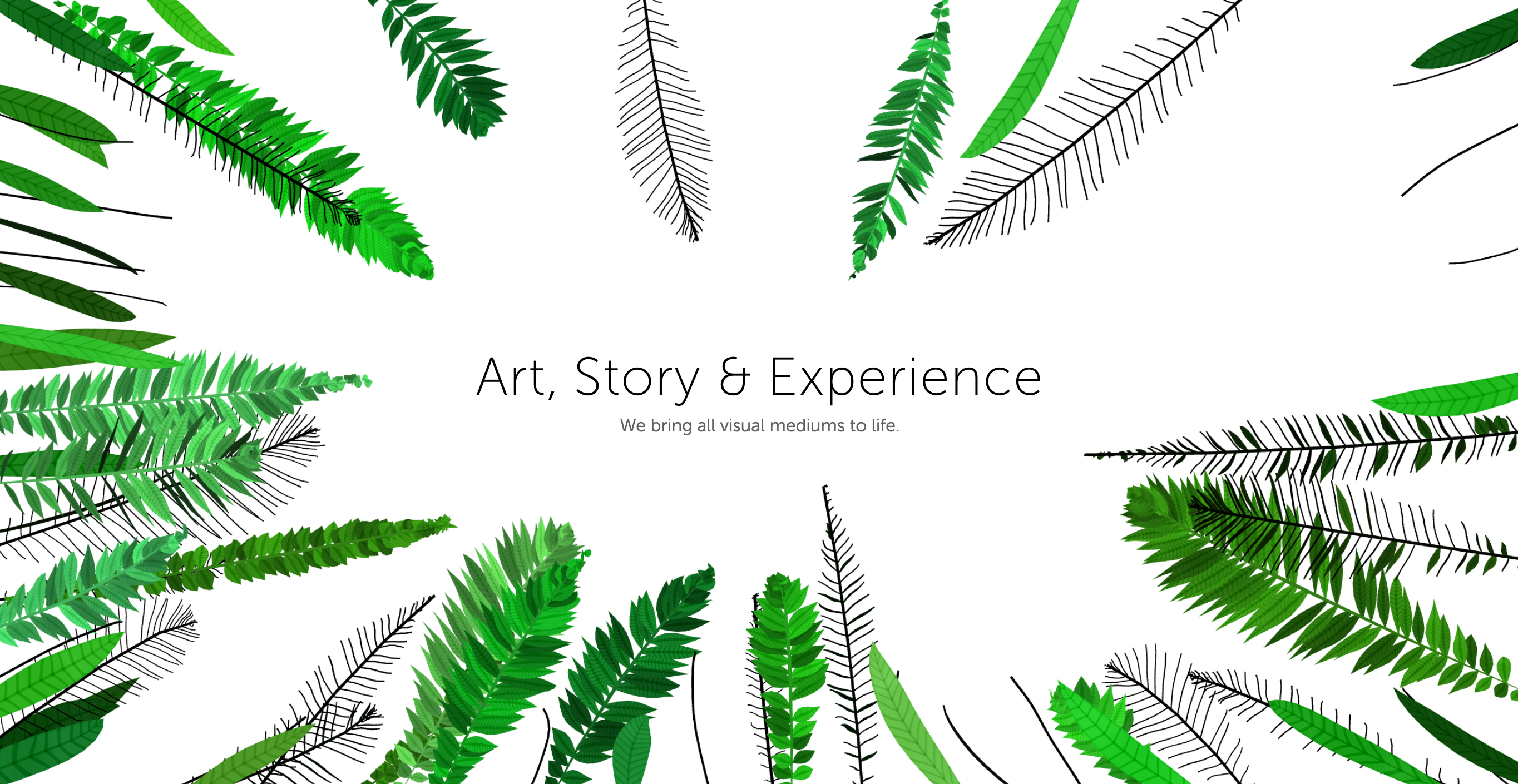 — Try the experience in your browser at https://tendril.ca/

I recently launched a small and interactive web toy for the Toronto-based Design + Animation Studio, Tendril. You can try it out on their home page. Their site rotates through different web toys, so you may need to reload once or twice to see it.

The experience is simple: brush your mouse across the generative plants to see them blossom and emit musical tones.

This was a really fun project to work on, and I’m very pleased with the outcome. It’s great to watch the reactions on Twitter and Instagram, including the heartwarming reaction by a four-year old using the experience on a tablet.

In this post, I’ll explore how I created the web toy alongside the amazing team at Tendril, and discuss some of the technical challenges faced along the way.

For a while now, Tendril has been showcasing different interactive animations on their home page (examples: 1, 2). They approached me with the idea of developing a new experience that introduces some aspects of generative growth and procedural geometry.

— One of Tendril’s previous web toys

The brief was very open: develop an interactive and playful toy for Tendril’s home page. It should co-exist alongside their other web toys, be modestly designed and simple to use, and load fairly quickly. The interactions should be easy to pick up and the overall experience should align with Tendril and their website.

An open brief with full creative freedom was a welcome challenge for me. In the last couple months, I’ve been trying to push myself to do more research, brainstorming, art direction, design thinking, and ideation before stepping head-first into development. I’ve found a pencil and notebook really is the best tool for this, although platforms like Pinterest and Behance can help organize references and find sources of inspiration.

After chatting over a few different ideas, we settled on the broad concept of “interacting with tropical plants”. 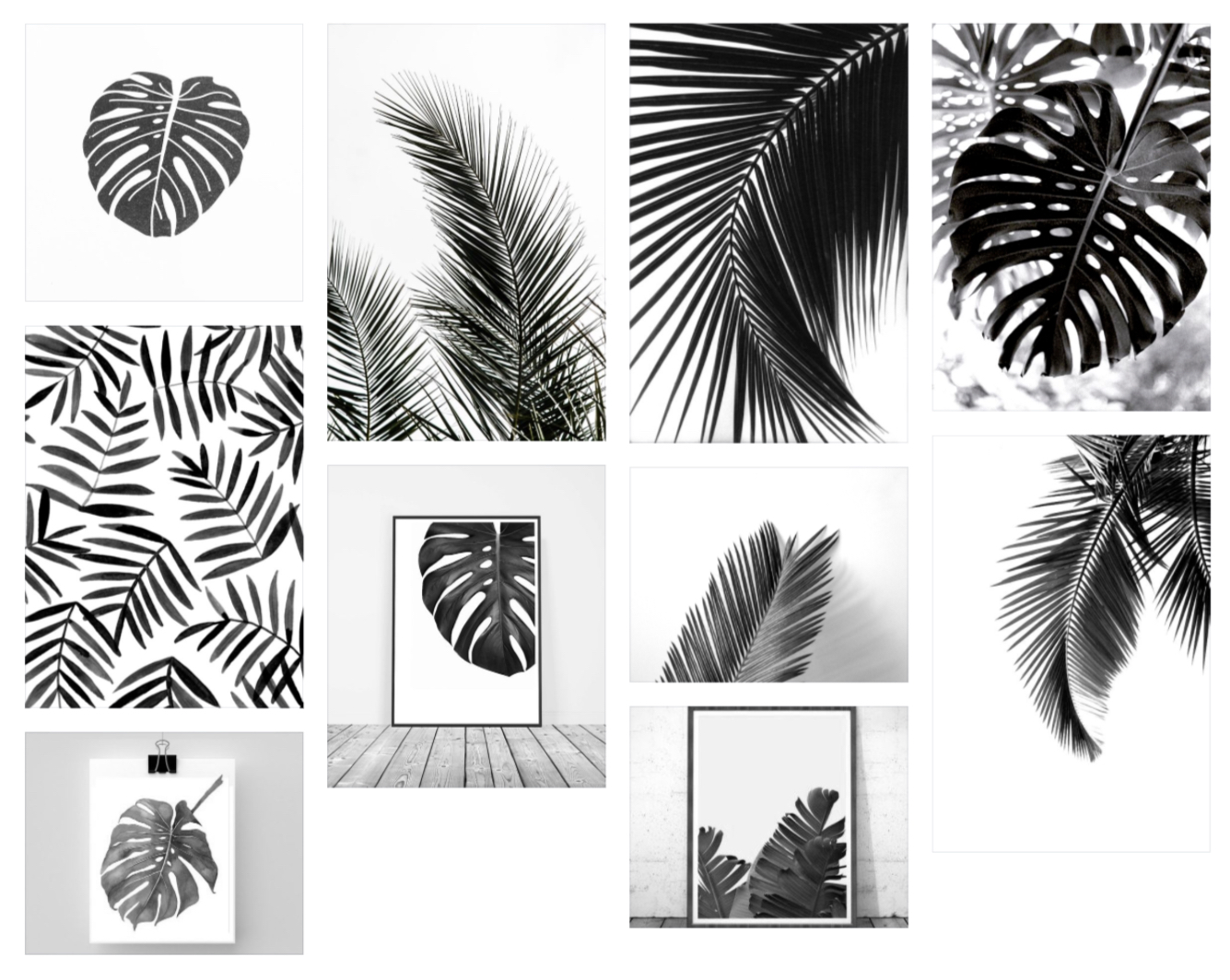 My early mood boards leaned toward a monochromatic and stark visual direction. It’s great to reflect back on these, as it shows how much a project will change as it interates in development.

💡 On a related note — I wish there was an open source tool for generating flexible masonry-style mood boards from a set of pictures. The UX of InVision Boards is great, but unfortunately it’s a pay-to-use service. 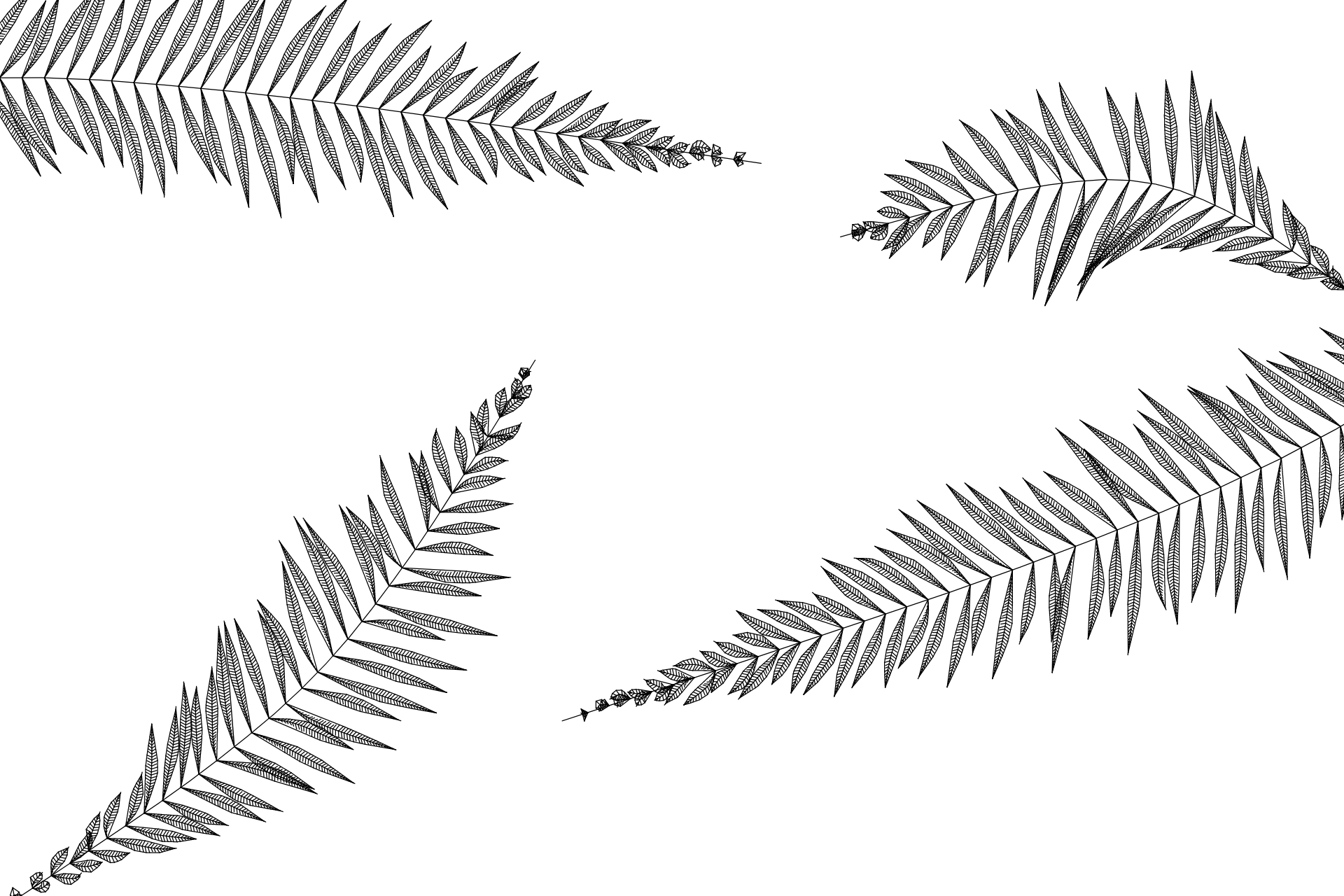 Initially, I began prototyping plant structures with Canvas2D and lines. This proved to be a great way to quickly iterate on ideas and geometry, without worrying about complexities added by WebGL and the GPU.

To build the procedural structure of the plants, I decided to use simple line segments and quadratic Bézier curves. A quadratic curve, as pictured below, is made up of a start point, control point, and end point. 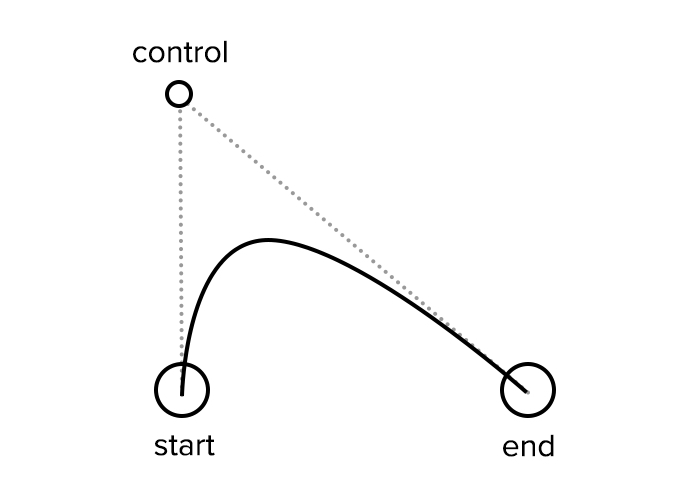 Using simple primitives and parametric functions (like lines and curves) made it much easier to manage things like animations, fast GPU rendering, mouse collisions, and even sound design. For example: you can define t, a number between 0 and 1, and use a parametric function to efficiently compute the 2D point at that value. 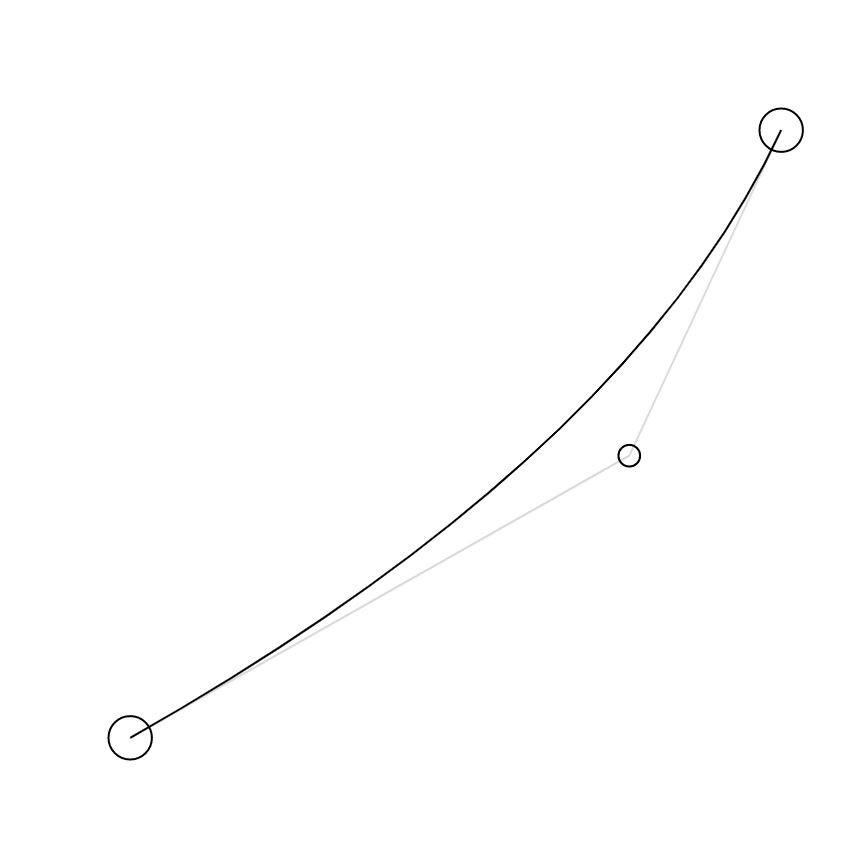 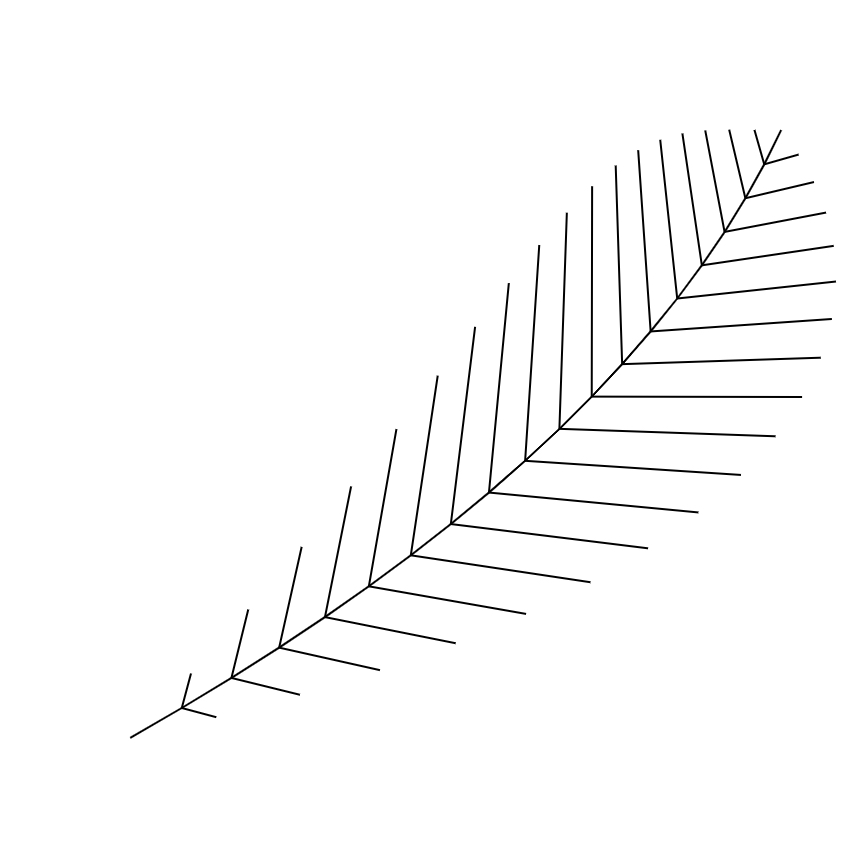 I’ve stripped my code down to a small Canvas2D demo below, and you can view/edit the code here. Click the below demo to modify the curve structure.

During this 2D prototyping phase, I made two mistakes that I will now be mindful of next time I prototype:

Instead of using a complex and potentially CPU-intensive physics system, I decided to use simple springs on the vertices of the plant geometry. This makes them feel a bit more like Jell-O, but produces a fun and playful interaction.

For each vertex in the plant stem and its leaves, I assign a target (i.e. the point it should spring toward), position (i.e. the current computed point), and velocity (the speed and direction of movement). The pseudo-code of our basic physics system might look like this:

I’ve included an interactive demo of this vertex springing, which shows how the quadratic curve can bounce and bend in response to mouse movements. Try the demo below, or browse the full code here.

For collisions, I’m using a point within radius test to determine mouse collisions. This is fast to compute, but not perfect: there are some “dead spots” on the leaf that will not trigger interactions. To produce more accurate sound effects when brushing the leaves, I used a point to line segment distance test on the smaller leaves. In retrospect, using the latter test for mouse collisions would have produced better interactions, but the difference is hard to spot with a large mouse radius and all the plants in the final experience.

Although Canvas2D was great during the prototyping stage, it isn’t powerful enough to achieve things like per-pixel shading effects.

Thanks to ThreeJS and its OrthographicCamera, it wasn’t too difficult to port all of the canvas code into WebGL. To render the plants, each stem is made of a single (re-used) PlaneGeometry and a custom vertex shader. The vertex shader positions the plane segments to fit along the curve (or line) defined by the stem or smaller leaf.

You can read more about this technique in a past Observable notebook I wrote, “2D Quadratic Curves on the GPU”. Using this approach for the curves and line segments in each plant, you end up with a scene like this: 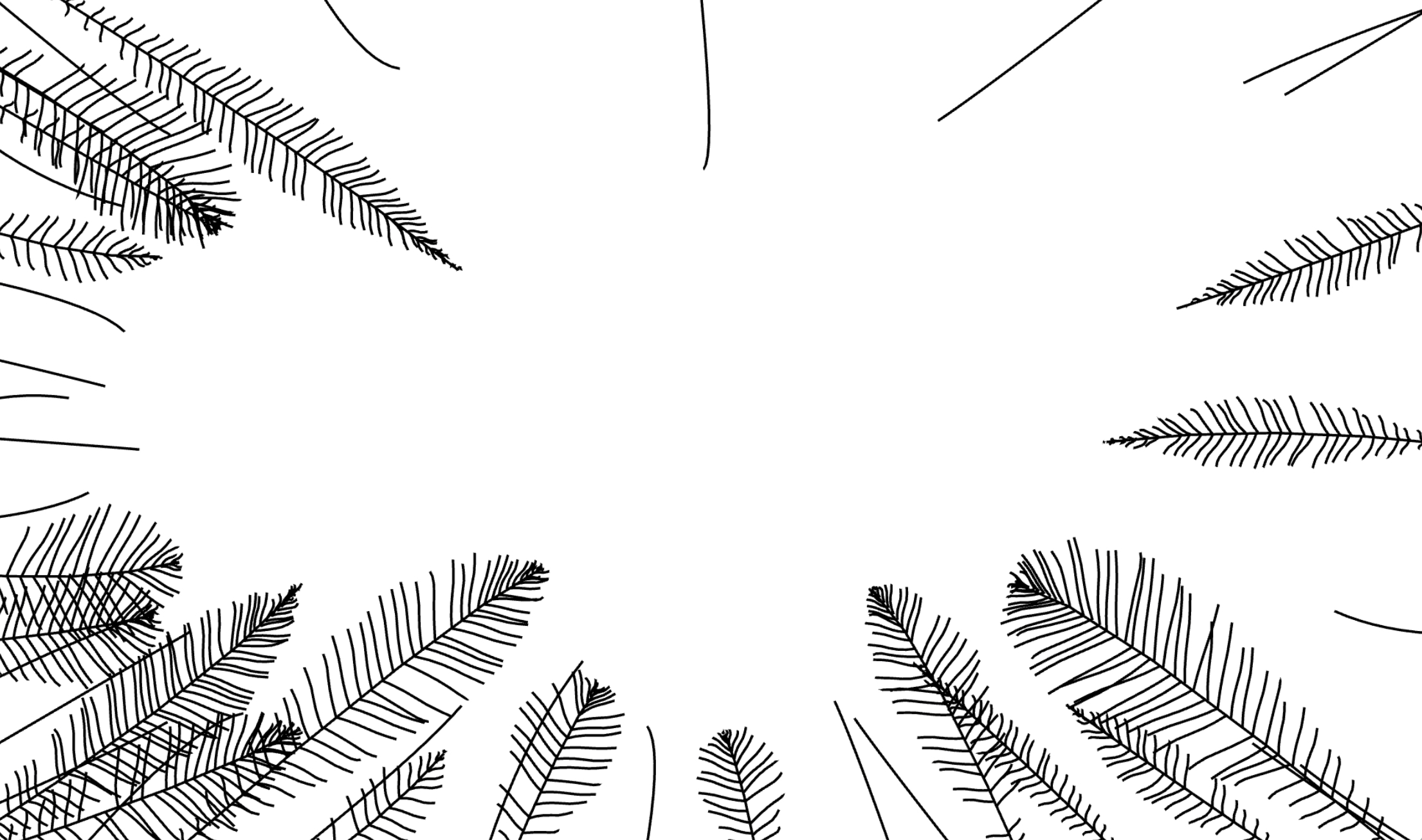 In my vertex shader, I also added parametric functions to sample a varying line thickness along the t arc length. For example: thickness = sin(t * PI) will pinch the start and end of the curve. With these functions and a wider line thickness, the silhouette of the plane geometries begins to look more like tapered leaves. 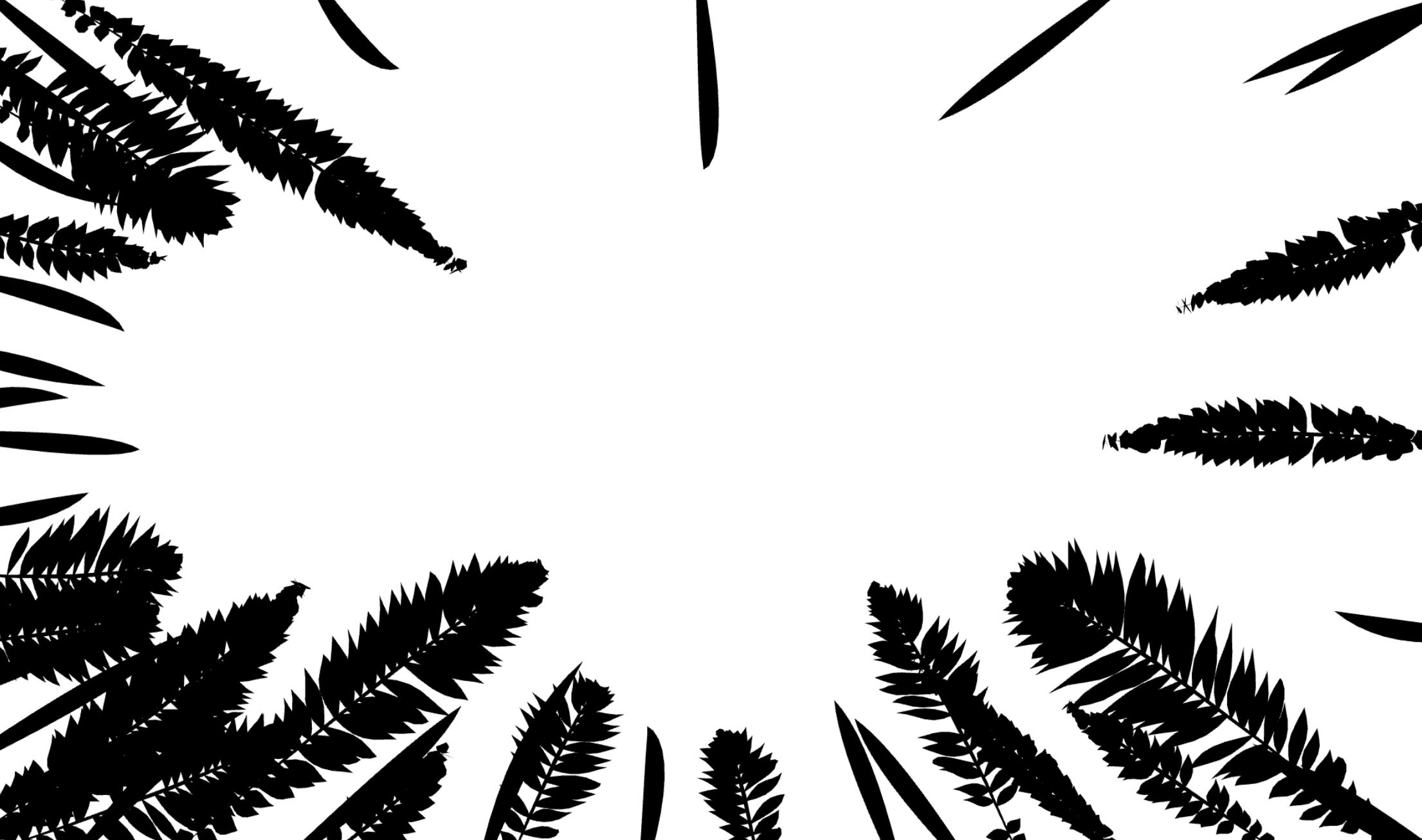 Lastly, colour and surface detail is added — each leaf has slight variation in brightness, hue, saturation, vein density and angle, and so forth. All of this is computed in the fragment shader – for example, the small veins and center line on each leaf is based on the texture coordinates, using fwidth() to compute a smooth anti-aliased 2-3 pixel line. 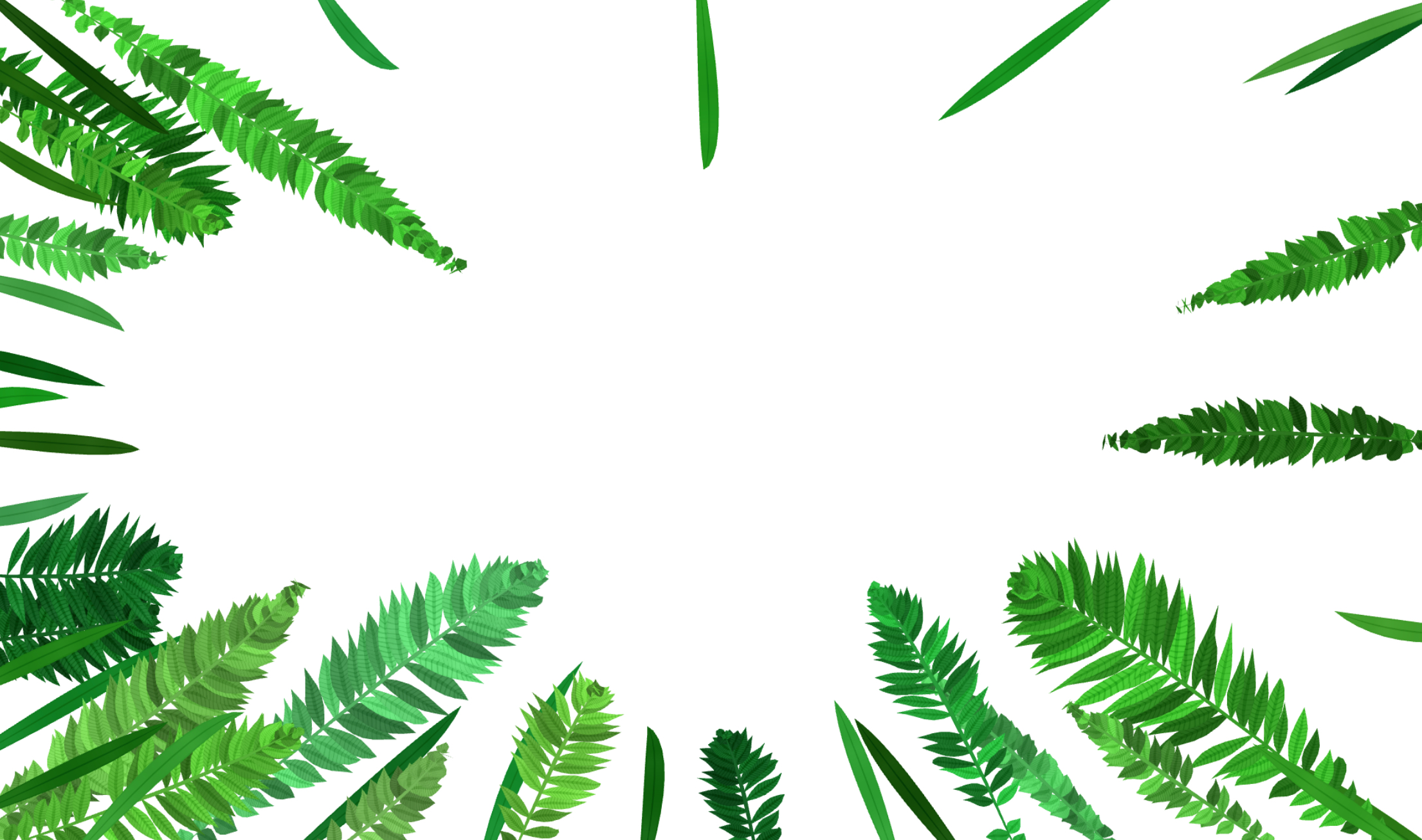 I used dat.gui for visual sliders during development, and shared iterations with the rest of the team using surge.sh. This allowed us to experiment with lots of different ideas and directions. This iterative style of development allowed us to come up with some interesting features: it wasn’t until later in the project that we introduced the idea of animating plants in from a black “hand-drawn” state. 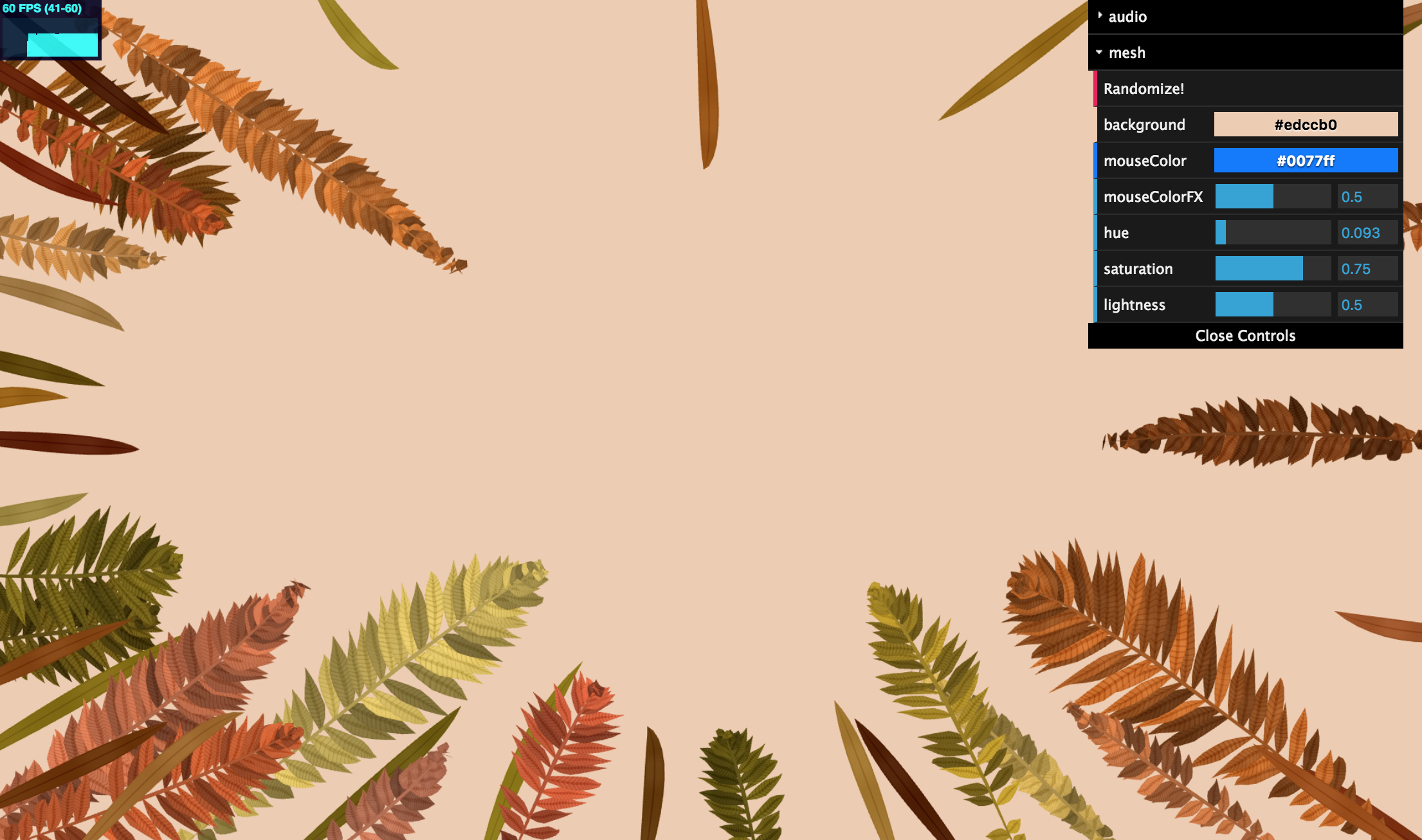 To bring more life to the project, I spent a lot of time on the little details. In fact, the core leaf structure and spring interactions proved to be the easy part; most of my development was spent in polishing the visuals, crafting the motion graphics, and fixing various issues across different browsers.

As usual with interactive web projects, the final stages of a project generally involve small tweaks to get things working smoothly across different browsers and devices.

I used several of my past modules to handle general cross-platform issues, such as touches for unified mouse and touch handling and web-audio-player for iOS compatible WebAudio.

There’s a couple other browser issues that held me up — here’s how I managed them:

Thanks to the team at Tendril, including:

Below you can find the source code for this blog post and its interactive demos:

Linear interpolation (sometimes called lerp or mix) is a really handy function for creative coding, game development, data visualization and generative art. The function interpolates within the range [start..end] based on a t parameter,... Continue →